MicroAd, a subsidiary of online advertising giant CyberAgent ($880 million market cap) yesterday announced they released a localized version of meromero park for the Taiwanese market. meromero park is an ultra-cute mix between a social network, a virtual world and a pet-rearing game. 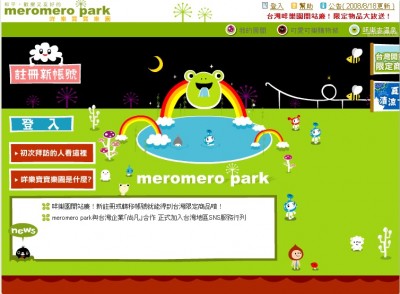 Although the service was only available in Japanese until yesterday, 20% of users are reported to be Taiwanese, which reminds one of the popularity the once Japanese-only video platform Nico Nico Douga enjoyed in that country before it eventually got localized as well.
Basic membership is free but MicroAD monetizes meromero park with display ads and by selling virtual items with which members have to take care of their cyberpets (i.e. food, accessories and clothes)

In cooperation with a Taiwanese partner, MicroAd will (obviously) change the language in the local version, launch a new payment system and throw in a couple of Taiwan-only goodies (see picture above for characters not available in Japan, for example).
According to reports in Japanese media, MicroAd aims at taking meromero park to 20 different territories in Asia, Europe and the USA in the next 2 years.