New Javascript library jsmap is released on cognitom.com , which enables a new way of choosing regions from diagram map.

Its Japan version seems welcomed favorably by Japanese web developers, as the Japan’s prefecture selection is always an usability headache.
There are Japanese websites provides region selection by drilling down by links, usually implemented on Flash. But this one can be used more easily, and not many open source library are available.
The US English version is also released. Like Japanese version, USA is divided into regions and able to be selected with map. 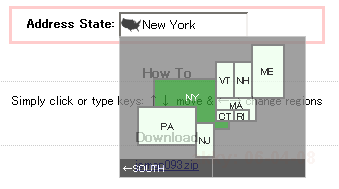 From my experience, people only need to put the state you reside, usually. So, state selection in US works easy with the common alphabetical ordered selection box. Making things difficult in Japan is that there are no “dictionary” order or no other clear order everyone agrees (most used order is “north to south”, but it cannot be uniquely defined, still confusing), which leads this jsmap library attractive.
The idea of this user interface is good and there will be many other applicable situations, like for country selection from Asia, Africa, etc.
I assume that Japanese is not the only culture/language which is not satisfied by alphabetical-order-form-selection. This kind of UI neccesity could be overlooked by mainstream user interface libraries most of which emerged from American/Europe countries with latin letters.