What Blockbuster Video is to the USA, Tsutaya is to Japan. The company is currently operating over 1,300 video rental stores in this country and boasts 27 million members.

Now, Tsutaya finally came to realize their future is the web: The company now wants to transform into this country’s Netflix – at least kind of.

And here is how they want to do it:

Tsutaya actually already began on Friday with offering high definition versions of hit US series, such as Lost or Desperate Housewives on “Tsutaya TV”. Japanese users can download the titles by accessing acTVila [JP], an HD video-on-demand service launched by the Japanese government, Sony, Matsushita, Sharp, Hitachi and Toshiba. 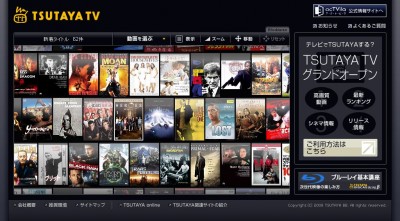 This means potential customers must own Internet-ready TV sets which is a clear drawback in my opinion. Netflix customers can view their streams on the PC or can choose to watch their downloads via the Roku set-top box, which is on sale in the USA since last month and costs 100 USD.

Tsutaya plans to expand their current repertoire to 2,000 titles until the end of this year by collaborating with Paramount, Warner, Walt Disney and NBC Universal.

Feature films will be downloadable for a whopping 735 Yen (7 USD, 4.50 Euros) and will be erased after 2 days.

Given that Japan has one of the fastest Internet infrastructures in the world, Tsutaya’s move is long overdue. KDDI woke up last year already and since then offers a “DVD Burning Service” (more info in English about that here and here).