Mixi (on Asiajin), the biggest Social Network Site in Japan, announced that Google Maps Japan now has an specialized Mixi button for users who wants to embed Google Maps on their users diary (Mixi Nikki). 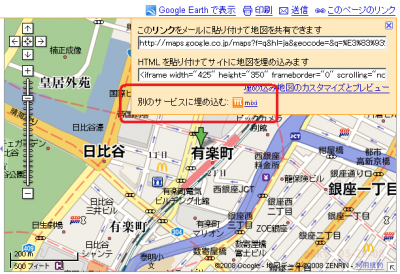 “Embed this map to other service: mixi”

Mixi has been having the “embed Google Maps” feature for a year which helps users to set Google Maps on their journal, but the user taking the code of the map was just instructed on Mixi page. However, this time the new bridge link is placed ON Google, and no other websites have such an integrated appearance on Google Japanese services.
via Internet Watch [J]