Have you ever heard of Ayumi Hamazaki, Ai Otsuka, Gackt, Orange Range or SMAP? These people and bands are on the forefront of the Japanese music industry which is the second-biggest in the world, following the USA.
The advent of Japanese popular culture in the Western hemisphere is not restricted to manga, anime, movies and video games. More and more Non-Japanese people start listening to “J-Pop” (Japanese pop music), mostly teenagers and young adults – the majority of whom cannot even speak one word of Japanese. J-Pop is also very popular in South East Asia where some of the stars are even more popular than in this country.

Up to now, online information and news about Japan’s music scene in English was scarce, scattered and outdated to say the least. Now, Tokyo-based web company Natasha decided to take its domestic music news platform Natalie on an international level.

The English site is online for a couple of weeks now and not yet complete. Some sections are not fully translated yet.
The concept of Natalie is pretty straightforward, both in the Japanese and the English version: Provide fresh news about the J-Pop scene (about bands, singers, concerts, new CDs etc.) in a clear and organized fashion. I believe the majority of the news in the English version are “exclusive” and “first seen” on Natalie, at least in that language. 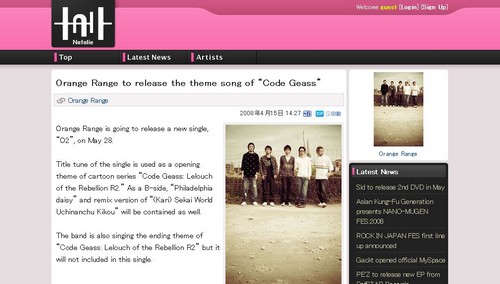 What I found quite remarkable is the comment function (you can add a comment under each article). If you have a Twitter account, you can actually comment on a Natalie news item if you include its URL in your message. The system will automatically transform your twit into a comment on the site! A similar solution is offered with Japanese social bookmarking services Hatena and Livedoor.
There is also a Facebook application available in English.
Access via mobile phones, iPod Touch (the iPhone is not yet available in Japan), a Natalie widget and other features may be added for the international version in the future.
Currently, the company makes money with Google AdSense and Amazon affiliate links. However, as of now the latter method of generating revenue is missing on the English pages.

I think the English service of Natalie has pretty good chances to be successful. Sure, the target group is not incredibly huge. However, it is certainly big enough to justify being catered with at least one reliable online source of information and news!
Also, Natalie has the advantage of being based in Japan which enables the service to be quick and direct in processing news about the country’s music scene. It will take time and effort to communicate the existence and benefit of the service to the target group though.
It’s always commendable if a Japanese web service is investing time, energy and capital to offer an English version to a global audience. This is especially true in the case of Natalie, a product related to J-Pop which can be regarded as an integral part of Japanese (pop) culture.