Recently a dangerous method of commiting suicide became a phenomenon in Japan. The method involves using a bottle of cleaner and bath salts to create lethal hydrogen sulfide gas.
This method was spread through the notorious ‘2ch’ bulletin board system. It is assumed someone explained the suicide method on some board, and many people copied and pasted it into many other boards.
This suicide method endangers family members and ambulance team because large amount of hydrogen sulfide gas are generated and the gas will last for hours.
The Products needed can be easily obtained at local drugstores. It’s obviously a serious threat to public safety. It is really sad that the Internet community kills people.
If you search a name of bath salts at Google, Google suggests ‘suicide’ as a related keyword. Amazon recommends a ‘complete suicide handbook’ (完全自殺マニュアル) for bath salts. 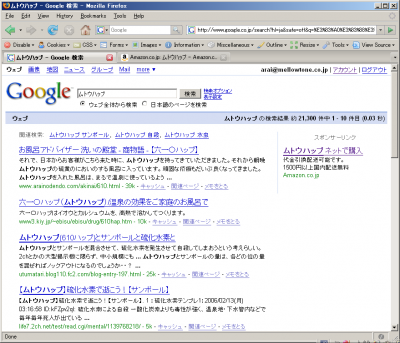 Some people say the major coverage of mass-media worsens the situation. Historically, there were many suicidal phenomena in Japan. The media should be really careful when covering suicide incidents.
In the 18th century, Chikamatsu Monzaemon wrote a play called ‘Sonezaki Shinju’. The play had generated a big shinju (double suicide) boom in Edo (later Tokyo).
Around 2000, there was a phenomenon which involved people committing suicide with coal briquettes. They burned briquettes inside a small room or a car to generate carbon monoxide. This method was also spread through the Internet and mass-media. Sometimes people commit suicide with people they met in Internet communities focused on suicide. This is called ‘Net shinju’ (ネット心中).
A partial list of hydrogen sulfide suicidal incidents:
* 2007 July, a college student killed himself. His mother and brother died by gas.
* Feb. 29th, a grad school student killed himself. His mother and grandmother were hospitalized.
* March 12th, a highschool student killed himself. His mother died by gas.
* March 27th, a part-time worker killed himself. His family member were hospitalized.
* April 24th, a junior highschool student killed herself. 20 people living in the apartment were hospitalized, a woman is in serious condition. 50 are evacuated from the apartment.
See also: