Japanese Twittersphere, one of the most active languages on Twitter, was confused by a simple but very effective viral trick since last week. 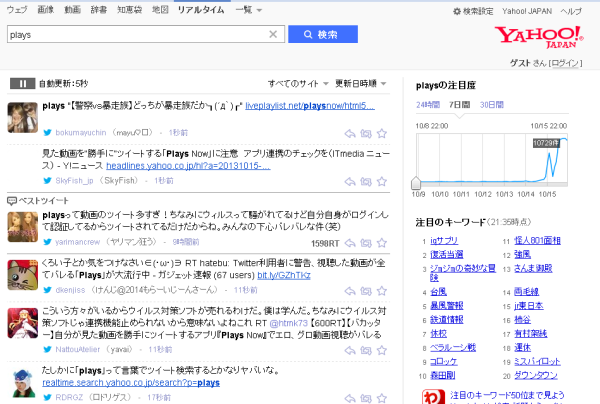 Since October 15, tweets with sensational titles of videos with a link to liveplaylist.net began to appear on people’s Twitter timelines among Japanese.
The tweets has the same format:

and if you open the link, the site says that it needs your Twitter application permissions (including posting tweets).
Many Japanese were lured by the catchy titles and gave permissions to this malicious site, and the site automatically let them tweet the same title/link. In few days, at least 30,000 tweets (according to Yahoo! Japan tweet search) revealed what indecent videos regular users wanted to watch, caused lots of confusions. One of the most reported video was a selfie nude of the killed actress by ex-boyfriend stalker this month.
A certain popular anime’s official account was tricked as well.
https://twitter.com/r_2z_love/status/390300932354764800/photo/1
You can still see someone unknowingly disclosing his/her proclivities every minute. The search results show what attract people more, sadly most of them are sensational ones.