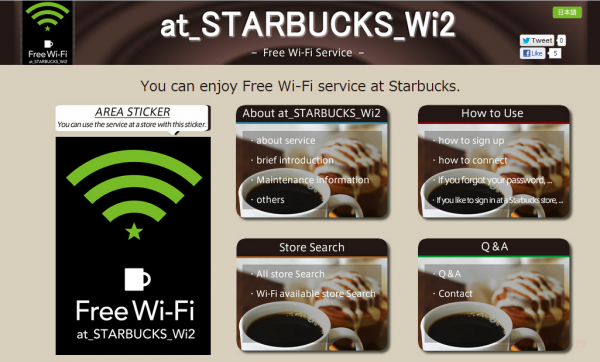 Wire and Wireless (wi2), a subsidiary of Japan’s second largest cellphone carrier KDDI, announced [J] its new free WiFi program at Starbucks Coffee chain-store in Japan.
Free WiFi at cafe? If you have ever tried to find free WiFi in Japan, you know this is a news.
The free WiFi program, “at_STARBUCKS_Wi2”, is sponsored by Starbucks Coffee Japan. What you need to provide is your mail address, when you use at registration. Although Wi2 is a KDDI company, there are no carrier restriction, which you might face at the many Japanese shops/restaurants where posting “free WiFi” stickers.
Wi2 offers English site and customer service besides Japanese, this seems reasonable as in Japan, visiting foreigners are the most likely people who need free WiFi.
They are to install the service since July 2, first from 200 stores in central Tokyo (out of 227), then by the end of this year, 850 of 955 shops nationwide will have it, according to the release. You will be able to search the free WiFi Starbucks here.
via ITMedia [J]