Gayle L McDowell’s book “The Google Resume: How to Prepare for a Career and Land a Job at Apple, Microsoft, Google, or any Top Tech Company” is translated to Japanese and sold in Japan this month. 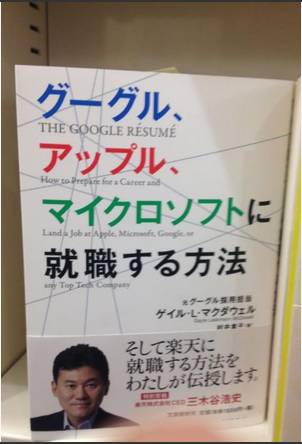 The cover image of the Japanese version book posted by a blogger Yumaendo got a huge buzz on Facebook, Twitter, Tumblr, etc.
Probably for Japanese market, the title of the book is changed to “How to take a job at Google, Apple and Microsoft”, and the extra cover at bottom says “… and I teach you how to take a job at Rakuten” with Rakuten CEO Hiroshi Mikitani’s photo.
Yumaendo wrote that how his photo were copied into other social media without his credit. The popular one on Twitter has “The least wanted extra cover is buzzing on the net” comment.
Generally, Japanese books have a color cover sheet in slick paper. Whilst the book is newly published and/or being promoted, they also have a shorty extra-cover with catches, recommendations by authorities, how many copies sold, etc. In store, shop clerks will offer to set another paper cover for people who want to hide what they are reading on train commuting.

Google Image Search with this photo