Finish embassy in Japan, who recently runs a Twitter account(@FinEmbTokyo) with folksy tweets and getting popular by showing deep understandings to Japanese subcultures. On February, they introduced to its followers Suomi-neito, a personified Finnish land, and soon later by getting feedback, began an official Suomi-neito illustration contest.
On March 1 2012, Finnish embassy awarded a few illustrations out of 35 applicants.
The grand prix is by @ba66ie. 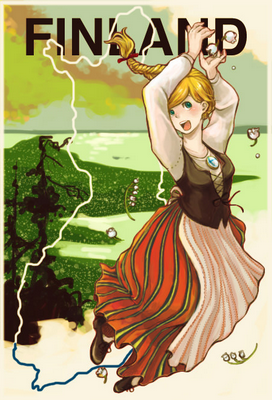 See all 5 awarded Suomi-neito-es on the embassy site [J].