After the unexpected collaboration announcement by Google and AKB48 project yesterday, Japanese Google+ scene is very reactivated.
The word by Google’s product VP Bradley Horowitz, who is visiting Japan (likely) for the AKB48 announcement is good how huge it is in Japan,

If you don’t know AKB48, you don’t live in Japan (or in fact, many other parts of Asia.) They are phenomenon that might be equivalent to the Beatles + American Idol + the Spice Girls + Justin Timberlake… They are a roster of more than 200 hand-selected performers who are the subject of huge media attention, and support from millions of devoted fans.

According to Google+ Ranking by UserLocal, top Japanese Google+ user by number of followers totally replaced with AKB48 girls. UserLocal also set up an AKB48-only followers ranking as it is the biggest interest on Japanese G+.

7 of the top 10(#2, #3 and #5-#9) are now AKB48 members who began Google+ yesterday. 20 AKBs are ranked in top 30. I was at around 25th before AKB but now at 67th after 42 AKBs 😉
In compare to Twitter, where the top rankers boast million followers, the most followed Japanese user only has sub-40K followers. When you think the influence of TV, it is not strange and the ranking will be soon occupied all by AKB48, or other TV celebrities may ride the bandwagon from Twitter and Ameblo.
This Google+’s move with AKB48 definitely let many ordinal people know and join Google+, but I am not sure how much Google expected this beforehand.

As reported, their messages on Google+ are being translated into 5 languages. It is done by a Google user AKB48 Translator to translating some (not all) of top AKB48 members’ messages into 5 (or 6, as it seems to write both in Simplified and Traditional Chinese) languages like this. 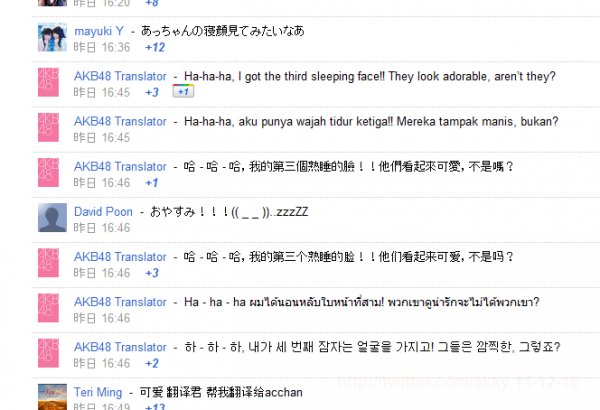 [Update 2012-03-26] UserLocal seemed to split the ranking to “AKB” and “individuals”, as the 60th ranked AKB48 member has more followers than the top individual, Google+ followed ranking must become just the AKB48 popularity ranking.