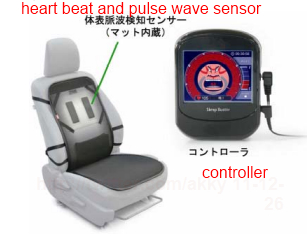 The product keeps collecting a biological signals in the driver’s heartbeat rate and pulse wave sensor, which are built into the driver’s seat, shows seven levels (concentration, relaxation, distraction, fatigue, drowsiness, physical deconditioning, etc.) of driver’s status, alert the driver to stop driving both by sound and display. It detects the transition of the driver’s mode from “awake” to “sleep” about 10 minutes before the driver really starts sleeping, which is expected to stop accidents.
With the management software “Human Tachometer”, planned to be released in April 2012, automobile carriers will be able to track their drivers’ health conditions, and other status changes such like drunk driving during their work.
“Sleep Buster” is developed by Delta Tooling Co., University of Tokyo, Oita University and Shimane Institute of Health Science.