Geekwire has been reporting (1, 2) US Amazon’s locker experiment in Seven-Eleven in Seattle, USA. With the locker, US Amazon customers will be able to receive their items not at home but at store.
I noticed that this news may be big as many other popular English blogs referred it. For me it is interesting because that option is totally common in Japan.
Amazon Japan has been doing it since July 2008 at Lawson, which has 8,600 stores nationwide. 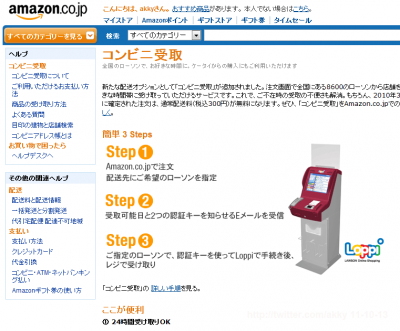 Only Lawson supports this service among 6-7 major convenience store chains, however, as Japan is slightly smaller than California, and if you see the number of California Starbucks is about 2,000, Lawson exists 4 times more than Starbucks in California. It is pretty dense. I would say you can expect Lawson on your commute path.
English blog NHK wrote this Amazon Japan’s service before.

Some major Japanese online bookstores offer the service that you can pick up the ordered books at convenience store. If you have an Internet connection in Japan, this way is better.
There are a lot of convenience stores in any cities in Japan and it is very easy to find some stores near any hotel or destination. Almost stores are open for 24 hours and 365days. They provide not only foods and drinks but also various kinds of services.