Mitsubishi Electric has developed a prototype app for iPhone and Android phones that could make life for the millions of commuters living in Tokyo a bit easier. The so-called “Yamanote Train Net” [JP] app is currently being tested in one train on the famous Yamanote line that circles the center of Tokyo.
Users can expect to get various information (and ads) delivered to their smartphone when they enter the train.
Mitsubishi explains what’s needed for the app to work:

“This is a completely closed Wi-Fi environment in a train. Content from a server on the train is basically provided via Wi-Fi, so the service isn’t directly connected to the outside world.”

The app tells users how crowded the train in question is (in real-time), what the temperature is like, when and where it’s best to change trains, which trains are delayed, etc. 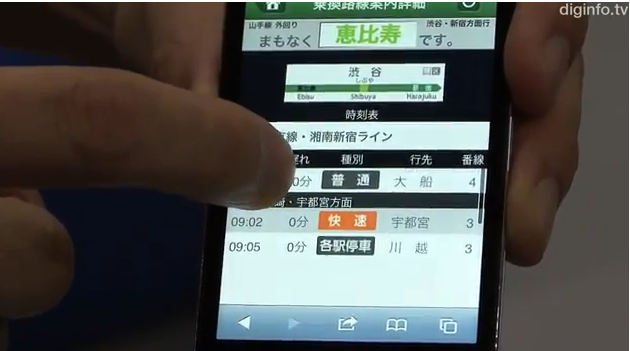 There is also a “channel” for advertisements (videos), but it will be also possible to download coupons or “entertainment” content on your iPhone or Android phone.
Downloads (Japanese only, free):
iOS
Android
This video, shot by Diginfo TV, provides more insight (Japanese/English subbed):