[Update 2011-10-28] Nippon Professional Baseball organization is reported [J] to unapprove the service name “Mobage” for the team name. Most other teams have company names in Japan, and DeNA was rumored to curve out its Mobage business to this rule.
We have been reporting (1),(2) that DeNA, Japan’s large social game networking Mobage owner, is at the table of talk on purchasing Yokohama Bay-Stars, one of 12 top pro baseball team in Japan.
As we wrote, Baseball is a huge business in Japan, and being able to have your company name on the team has massive advertisement effect, which can not be compared with ownership of, say football/basketball teams in Europe and North America.

Objection from other IT companies

Yomiuri (Japan’s NY Yankees) and other Se-league teams turned to support DeNA’s join, which sounds strange as they were the one who were reluctant to accept companies from newer industries. The stranger is the latest joining owner, nation’s largest online e-mall company Rakuten running Tohoku Rakuten Golden Eagles, is reported to be the most strident naysayer. According to Daily Sports [J], a certain club head told that Rakuten and some others from Pa-league would be against the deal, which if they can gather four owners they can turn down. It is said that those companies reason that DeNA is running “Deai-kei”(dating) site. It is true that Mobage is sometimes cautioned that some people use it as a meeting place with minors, but if say so, Rakuten also has Zenryaku-profile, a so-called “purofu” site where many teenagers have been involved in such troubles.

Like when Rakuten and Livedoor tried to join the business in 2004, IT/Web companies tend to get adverse conditions as they are not a “decent” business from some traditional business people’s viewpoint.
Yokohama chambers of commerce expressed [J], “Yokohama citizens, who love baseball, scarcely knows about the rumored company. (so they must be) annoyed.” to the local newspaper Kanagawa Shimbun.
Then, probably supported by local business circle, a new group formed around Keihin Kyuko Dentetsu(=Keikyu), a local railway company, is reported [J] to be aiming another purchaser candidate. There were many more teams (like Kokutetsu, Nishitetsu, Kintetsu, Nankai, Hankyu) owned by railway companies decades ago so it would be a comfortable choice by elder owners.
Makoto Haruta, a chairman of DeNA, told [J] that they would keep the team for long and it is not their intention to sell the company name with short term ownership, responding to concern.

Hochi, a sports newspaper under Yomiuri group, reported that the deal has been fixed and DeNA and TBS Holdings would announce it on October 28 [J].
Hochi made up a mock photo of the new team’s uniform having “Mobage” logo on its front, cellphone on the left arm. 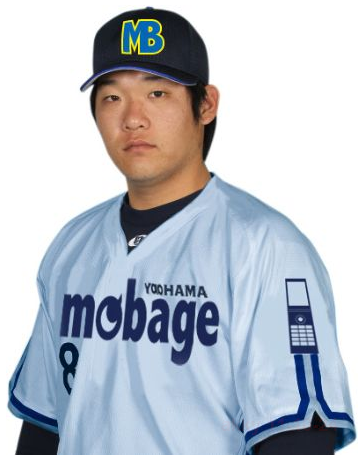 Different from its rival Gree, who runs social network Gree, Mobage is just one (albeit huge) section of their businesses. Hochi says that DeNA may curve the Mobage business into an independent subsidiary, to satisfy the rule that those baseball team can have their “company name”. Then the team name will be “hometown city name”+”company name”+”nickname” = Yokohama Mobage Bay-Stars.
Changing its nickname on purchasing was often done, like Bay-Stars was Whales before. There is a joke on Twitter that it is better to rename with “Royal” from Mobage’s flagship game Kaitou Royal, but that may cause more troubles with loyal Yokohama fans.