Japan’s second biggest telecommunications firm KDDI announced [JP] it has acquired an equity stake in French based Total Immersion S.A., an augmented reality (AR) software maker. Business daily The Nikkei says it has learned KDDI paid 100 million yen (US$1.3 million) for a 15% interest in the company.
Total Immersion has offices in North America, Europe, and Asia (their Japan office is located in Tokyo). The company was founded in 1999 and received US$5.5 million in funding from Intel and others back in March this year.
(So according to The Nikkei, Total Immersion’s valuation can be estimated to be somewhere around US$8.7 million, while TechCrunch reports that (before the money from Japan), the company collected US$11 million from investors over the years.)
In any case, KDDI says they are especially interested in using Total Immersion’s core technology, the so-called D’Fusion AR software platform, for smartphones. Subscribers can expect the first content based on D’Fusion to be rolled out in December (the picture below shows D’Fusion Mobile used as a marketing tool). 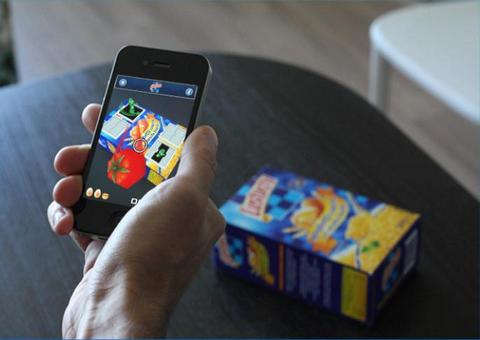