We just reported that electronic chain-store Yodobashi Camera began the same day delivery around Tokyo on weekend. I saw it as the race for better service level against its competitors, including Amazon Japan.
On September 5, Amazon Japan started a new delivery option “Hatsubaibi Todoke”(= deliver on the release day) initially with selected games, Gamespot Japan reported [J].
Amazon Japan’s top page is boasting this “Hatubaibi Todoke” at the top center, 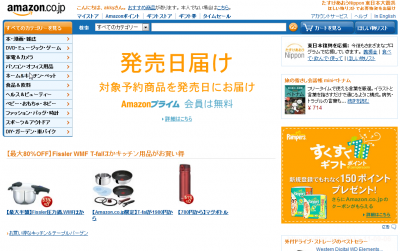 The option cost 350 yen($4.5) unless you are Amazon Japan prime member. Amazon Japan reportedly will add more products for this option. It makes sense for me as gamers are the people who really want to get and play the products as earliest as they can do. By guaranteeing the release date delivery, more people who bought the newly released game at big retails (like Yodobashi Camera!) may turn to Amazon.
Then today, September 6, Yodobashi Camera puts a big banner on its site top, which says “Delivery on the release day is nothing unusual on Yodobashi for long”. 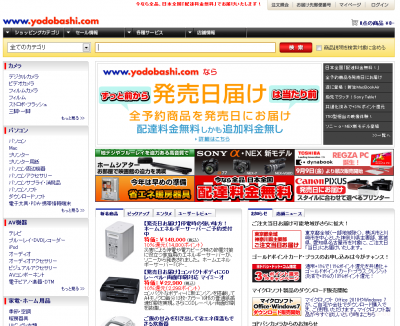 It says that Yodobashi’s online mall has been shipping all pre-ordered products, not only games but also CD/DVD/Blue-lay and other electronics appliances which are labeled so, for free with no strings.
They do not mention Amazon at all, which is natural in Japanese business practice, but it is clear that they set up this new informational campaign against whom. See how Yodobashi’s banner uses the same color and font as Amazon Japan’s, and adds their texts over it. It’s funny.