Lady Gaga’s Japan visit was a sensation, left a lot of news with celebrities including Japanese’ Ophra Tetsuko Kuroyanagi, prime minister Naoto Kan and SMAP, long-time ruling boys unit.
Lady Gaga’s appearance on Japanese TV was estimated 135 million dollars worth [J] if it was advertising.
Gaga is recognized as a celebrity who directly talk to her fans over social media. Japanese, both media and people chased her tweets during her stay.
What happened today is that they noticed that her uploaded video, a TV program hosted by SMAP featuring her, which she had introduced on twitter on 12th, is not watchable. The same movie was posted on Rolling Stone, too. 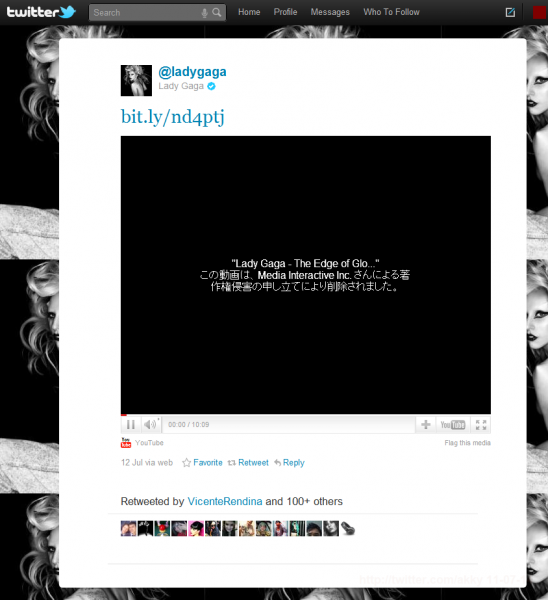 It was not only that. Lady Gaga’s YouTube official channel has been stopped, too.

The movie was claimed by Media Interactive Inc., which is the same company who mistakenly removed YouTube movie uploaded by a popular Japanese singer Hikaru Utada before. They were her own official movies.
SMAP and its agency Johnny’s Office are well known by their hard-line portrait rights control. It is not easy to find their unofficially uploaded photos, at least on Japanese web. Lady Gaga uploading such movie and a photo over Twitter was worried by Japanese users, because if other Japanese talents did that, she/he will get hard time by that. Actually, no Japanese would post their photos of Jhonny’s Office talents on the web, as they know it would be troublesome.
When SMAP sang in front of Chinese Premier Wen Jiabao, who was visiting Japan, most Japanese media did not post a photo with SMAP, whilst Chinese media did.
I do not embed the photo of Lady Gaga and SMAP here, because I do now want to be cautioned. 😉