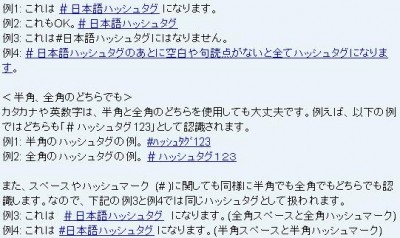 Then, a lot of Japanese Twitter users started strange wordplay. This is a trend hashtags of yesterday’s Tokyo. 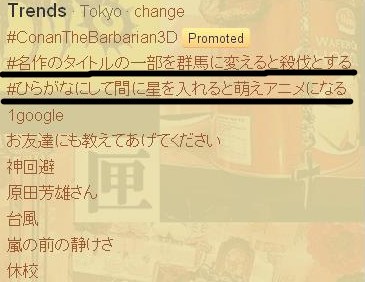 What are these long hashtags? They are themes of wordplay.
# like a game in “Who’s Line Is It Anyway?” (Akky)
For example, this long hashtag

means, #Mix the Ghibli‘s movie titles. The funniest one wins.
Users who wants to join in this wordplay attaches this hashtag and Tweet a works. They are really funny! However, It’s impossible to translate them into English…
# Let me(Akky) do direct translation on some of them. “Spirited Away Now”, “Fatty Pork”, “I Hear Well”, “Sudden Move Causes Crap”, “Yamada Hides Puke”, etc. Still not unexplainable why they are so funny in Japanese…
These are my tweets(works)

#If  “Younger sister” is put on the Japanese version title of the progressive rock number, they become like the title of the light novel

I used King Crimson and Japanese progressive rock band Yonin Bayashi as materials 🙂
There are various themes elsewhere. This wordplay does not have a purpose, a prize and sponsor. In addition, we do not know who thought about what kind of hashtag. They appear all too soon and disappear all too soon.
It’s a very interesting and funny phenomenon. However, I can’t explain it in English. It’s exactly only in Japan.
One user pointed out,