Certain American startups do pretty well in Japan, if a report issued today by Nielsen Japan (NetRatings) is to be believed (as with all web statistics providers, take the following numbers with a grain of salt).
The company investigated the traffic Dropbox and Evernote have seen in the past 12 months, and it appears the first five months of 2011 have been especially successful for both services in Japan.
As you can see in the graph below, Nielsen registered 559,000 visitors for Evernote in this country last month (for the website and app) and even reports 637,000 monthly visitors for Dropbox. According to Nielsen, Evernote had just 67,000 users in May 2010, while Dropbox had 325,000 (all data: PC access only). 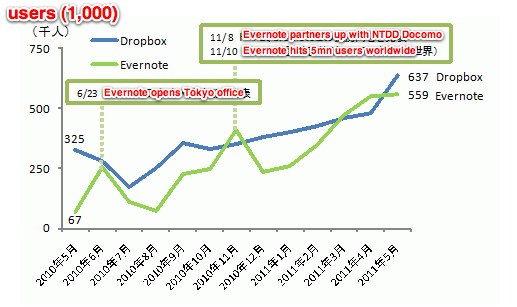 Both Evernote and Dropbox were launched in the US in 2008. Evernote established an office in Japan, the company’s No. 2 market worldwide, in 2010. Dropbox started offering its UI in Japanese in December 2010.