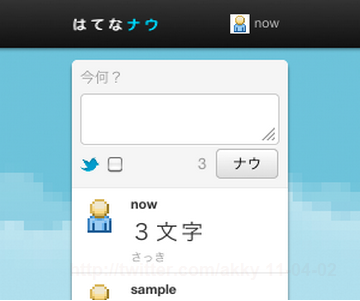 In 2009, we reported a nano blog chuitter.jp, which limits message by 14 letters, 1/10 of Twitter. However, Chuitter ceased after one year (probably domain expired).
Hatena Now got 7,000 users and 25,000 messages in a single day, however, they decided to close the service at the end of 1st, “to make the running time of the service the world shortest as well” [J].
Hatena has been running another microblog service Hatena Haiku, so I guess that there might be internal confusion of product management like Google has, seen on Google Wave/Buzz and Android/Chrome OS.
The last tweet by Hatena was “おわり”(O-Wa-Ri = end), which could have been 3 letters in English, too.