All variations of Goo’s RSS Readers, web reader [J], Windows application version and Japanese cellphone version will be discontinued [J]. PC and mobile web versions will stop on May 31, 2011. You may keep using the Windows app version, but no support will be provided. 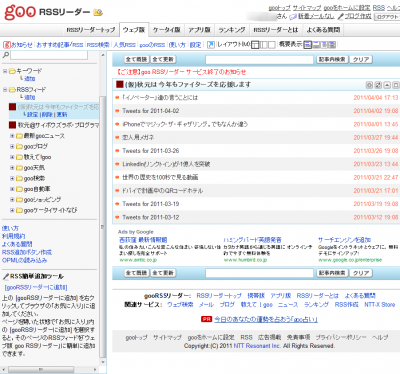 In Japan, Bloglines got popular first as web-based RSS reader, then Livedoor Reader caught tech-savvy people. Later Google Reader is catching up. But as same as in English, RSS reader is not a prime tool for majority in the shade of social media like Twitter.

Goo’s movie sharing service ClipLife [J] is also announced [J] to stop at the end of May. 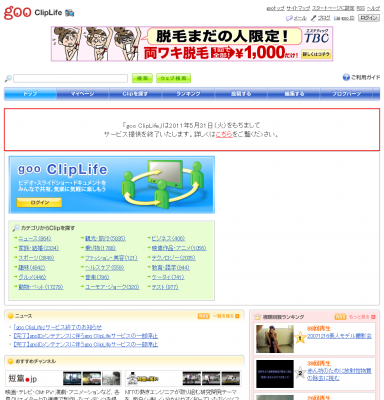 According to Internet Watch [J], Goo RSS Reader began September 28, 2004, ClipLife started in August 2006.
As well as another big Japanese portal Nifty, those portals needed to have whatever new trending service under their brand, and that made them keep running those less popular web services for years. April 1st, the beginning of Japanese school year, is one good timing to cut them off and reassign their resource to something newer.