Yahoo! Mobage [J], a joint PC social game platform by two Japanese web gorillas Yahoo! Japan and DeNA, announced [J] that the number of their users passed over three million in 5 months since its official open on October 1st, 2010.
3 million is bigger than 2.55 million, the number of active users Facebook Japan has gotten so far (according to Socialbakers.com), though Facebook’s Japanese users also shows a spike helped by recent media rush. See the chart from Socialbakers. 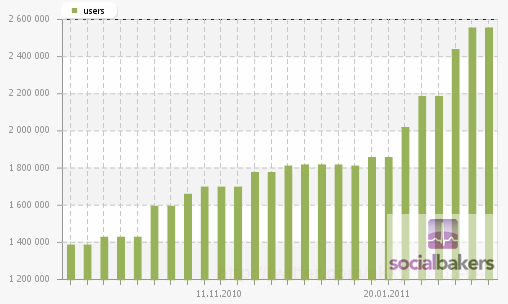 The social network service is designed around social games, but has user profile, messaging between users and user communities like other social networks. Yahoo! Mobage’s profile page is like this, 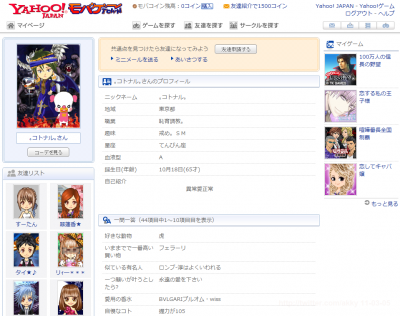 As DeNA repeatedly says their “virtual graph”(friends network does not necessary need to be based on your real-life network) does not compete with “social graph” oriented networks like Mixi (and Facebook), you may say how huge mobile Mobage-Town/Gree and PC Yahoo! Mobage has no relation with real-world-based Facebook’s success in Japan.
But if you start suspecting the future importance of building friends network from real-life, this means Facebook Japan becomes down to the 6th player, needs to chase Yahoo! Mobage in addition to Gree, Mobage-Town, Mixi and Twitter.