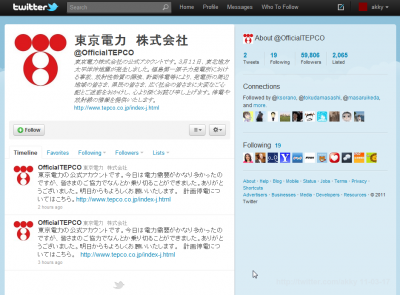 This Japanese Twitter account quickly got over 50,000 followers, which shows how people’s interests are pointed on TEPCO now. The first two tweets are identical with 1 hour gap, said,

“It is an official TEPCO account. Thank you for your cooperation for saving energy, we could avoid planned outage though the demand for electricity today was quite high. Your contribution will be appreciated tomorrow and after that. See the detail for the rolling blackout here, http://www.tepco.co.jp/index-j.html”

There are a lot of critics on TEPCO that they did not disclose enough information, both reasonable and unreasonable, from inside Japan and overseas, from individuals and governments.
It must be very hard for TEPCO to follow the implicit rules on social media, which many Japanese Twitter users already pointed out by seeing the first two tweets. We keep watching if this will be a good new channel to connect the half-public huge enterprise and people.
via ITMedia. Thanks to confirm that this account is real.