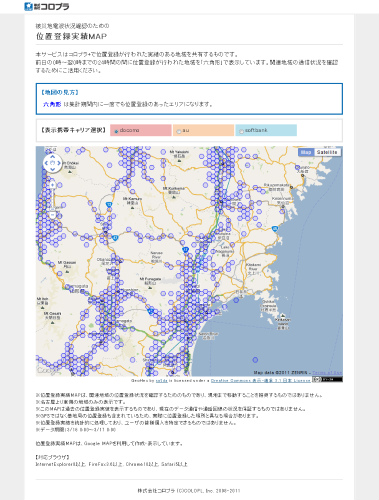 Japanese Location based service Coropura(Colopl.jp) makes a map of east Japan to show where its users checked in the day before [J].
The hex displayed on the map means there were at least one check in yesterday. The map has a choice of cellphone carriers, Docomo/au/Softbank. Docomo must have more users and good coverage.
The screen shot below is a check-in map around Fukushima nuclear power plant on Mar 16th. 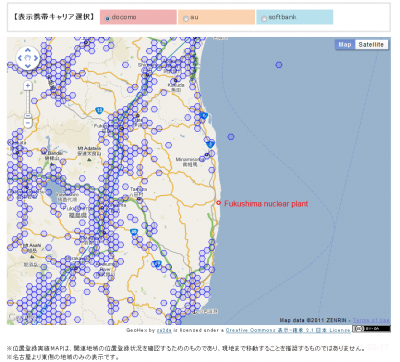 Colopl, one of the most successful location based service in Japan, has more than 1.5 million users, many of who play location based game on Japanese cellphone and smartphone. The service really earn money and the company is expanding. (Asiajin 1, 2)
The map shows that even people on east coast of Tohoku, where massive tsunami hit, still are playing it. It may be possible to check in with fake location, but Colopl prevent it. It is good to see some people using cellphone there and living daily lives.
Both Google and MapFan provide a visualized map to show which roads were really used by collecting car navigation data helped by Honda and Pioneer. These are also good tools to see people’s activities in the area.
Google
MapFan