Nottotter.jp is a new web service using Twitter account to exchange your writing rights with other Nottotter members for 5 minutes. In other words, registered user on Nottotter can tweet on some other user’s account for 5 minutes.
A Hatena blogger id:hitode909 developed and released [J] this Nottotter, which means “I’ve taken it over.” in Japanese. 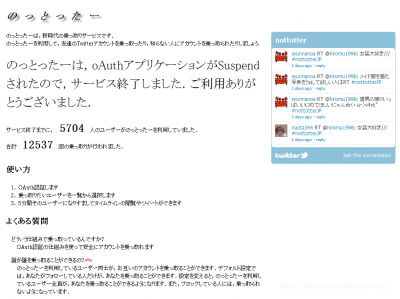 The service authorizes users by Twitter OAuth API, and gets delegation to tweet under his/her name. When you take over other users right, your messages are tweeted by that user with hashtag #nottotterJP. When the 5 minutes passes, the service tweets under the user’s account that “@you took over @theuser account”.
The service quickly spread among Japanese Twitter users, over 5,000 people registered to make 12,537 tweets under others’ name before the service was shut down by Twitter official on 23th, two days after the launch. Checking the log tweets showed who took over whose account, so you cannot be really anonymous if you write something really nasty, but such many Japanese Twitter users seemed to enjoy the confusion caused by this intentional changelings.
Here is a sample part of tweets record showed on Nottotter.jp site. 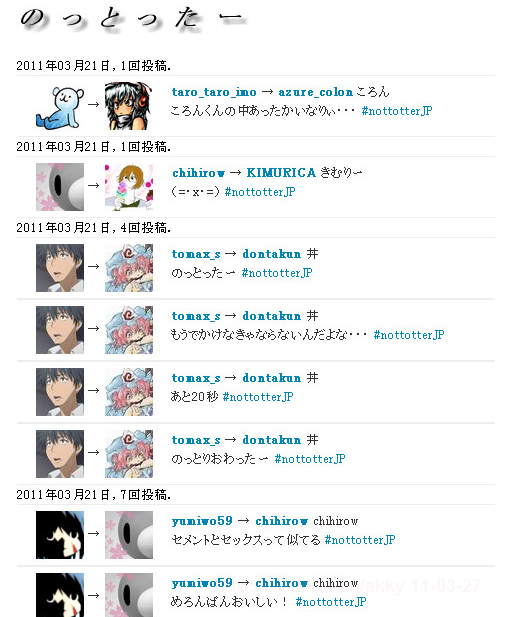 After the API suspension, id:hitode909 posted a reply from Twitter official to his inquiry.