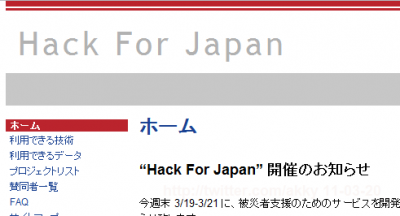 Many web companies and individuals are now running a nation-wide, virtual and real (Kyoto, Okayama and Fukuoka in West Japan) hackathon (collaborative programming marathon, see Wikipedia) named “Hack for Japan” [J] through this three days weekend (Monday is holiday, Spring equinox day, in Japan).
Several companies are offering APIs, cloud hosting and data for the event, and new services will be expected to help suffering people from the Eastern Japan earthquake/tsunami/nuclear crisis.
The list includes several Japanese web companies like Rakuten, Hatena, Yahoo! Japan, Mixi, Sakura Internet, Foreign companies’ Japanese branches like Amazon, Google, Microsoft, Salesforce, Twitter, Evernote, Cloudant, and foundations like OpenStreetmap Foundation. The list may be adding more contributing companies.
Many web designers, developers and producers have been discussing on ideas on Google Wave and IRC channels. Ideas are being voted(some have English translations) and will be implemented on Monday, and they are expected to be improved even after that, as long as they are necessary.
Most talks are done in Japanese, but there is also an English wave, you might be interested in adding your ideas and advices. 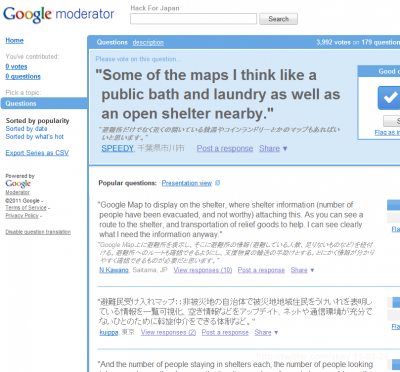