On February 9th, Mixi enhanced their Mixi Check (service like Facebook Like) and Mixi Check-in (like Foursquare) to NFC(Near Field Communication) compliant. The word “Real” is attached to these two service enhancements.
By that, now you can show your fondness for NFC embedded items on Mixi Real Check, in addition to likes on web pages. You can check-in on Mixi Real Check-in on any NFC enabled objects even if your GPS is out of service, like in building, underground, etc.
Kyosuke Inoue, who worked for Mixi but individually developed Taglet, one of the first Android NFC app last month, extended it and connected with Mixi Real Check and Mixi Real Check-in.
Inoue demonstrated how you can check(like) a book having NFC tag, 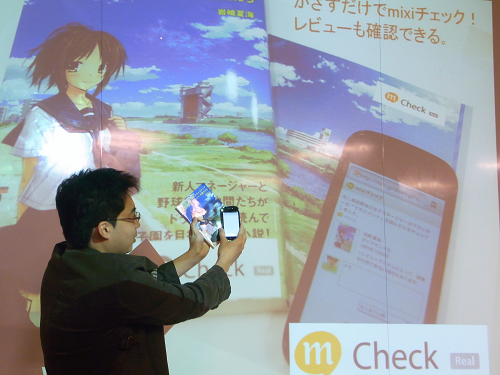 You can, for example, assign location on the name plate in venue, to realize more segmented locations even in a single room, which cannot be done with GPS. 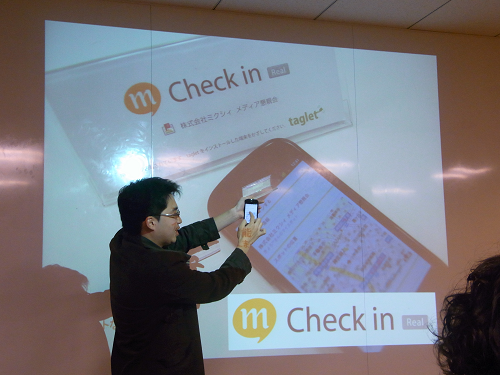 Sticker-type NFC tag is available around 50 cents or less, and expected to be cheaper in near future. Shops, events can set several tags on sections, posters on wall, whatever. For example, rewards program promotion can be designed with those detailed locations.
Interestingly, Mixi Real Check and Check-in currently supports only Google Nexus S, which has not been sold in Japan. We were explained that Mixi development team imported about 60 of them and has been playing around.
Their release said that Japan is the most advanced country on Near Field Communication applications, like on train ticker and e-money, with knowledge on them, Mixi can widen its web services to connect real world items and locations.