Who is the most popular social network service in Japan?

The major three services have been racing on their number of registered users, and now it is difficult to tell which is the biggest. All three can tell they are the No.1. 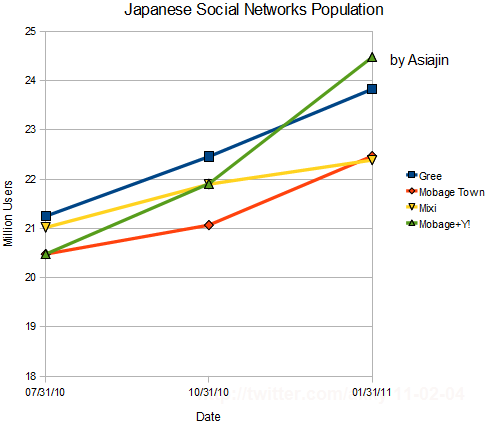 Gree: On the report, 23.83 million users is the largest number among all. They keep the top position since they snatched it from long-time champion Mixi in July 2010. From this, you may tell that Gree is No.1.
Mobage Town: DeNA sums up their original, mobile-only network Mobage Town and Yahoo! Mobage, recently launched PC-based new network with Yahoo! Japan. Yahoo! Mobage got 2 million users within half an year and if you count them into Mobage users, the total 24.48 million is 650,000 more than Gree’s number.
Gree’s membership includes their unpopular PC version users (only 1% of traffic comes from PC), but Gree user can access both version by single account. DeNA seems not exclude people who registered both Mobage Town and Yahoo! Mobage.
Mixi:
[Update 2011-02-04] Mixi’s 3Q report [J] has come. Their official number of users is 22.39 million, at the end of December. It should be very close to the number of Mobage Town’s mobile users now. Mixi possibly ranked down, or will be down soon at the third place even without Yahoo! Mobage.
If you count on PC, Mixi is still the largest social network service in Japan. The services which can not track Japanese feature phone traffic, like Alexa, ComScore and Google Trends for Websites, are showing Mixi is leading a lot. (That is why I said that The World Map of Social Networks should set Mixi as the top as it is PC based research.)