Quality Commander [J] from Japan novel Corporation [J] is a gadget test automation robot which combines an industrial robot with camera and software.
A blog S-max reported [J] their demo at Embedded Technology 2010 conference at Yokohama.

The robot touches the device’s screen, by program and/or repeating a human’s first operation. The software will capture an image on the screen and compare with the designed result. 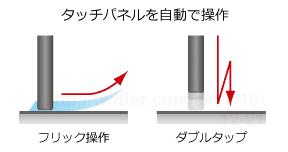 The robot with several different attachments for touching can even emulate flicking and double-tapping.
As how much scroll touch would make is different each time, capture system can detect the desirable output on the different part of the screen, dialog/pop-up as well.
How it is working is on YouTube (a bit noisy),

The basic system costs 4.55 million yen for standard cellphones. With touch-panel options, the price begins with 5.9 million yen (US$70,500).
The company says on the product page that by the Quality Commander, device vendors and cellphone OS/application vendors will be able to run a load test like repeating the same operation for 100, or 1,000 times and find a bug only happened when the device is used after long hours.
via @kaorun