Virtual Dating Game LovePlus on Nintendo DS was a smash hit, let Konami themselves publish a sequel LovePlus+(Love Plus Plus) [J] (feature limited), iPhone version and coming arcade version.
Two gigantic social gaming networks, Gree and Mobage Town, who have been adding new games every day, of course ride on this trend. On the same LovePlus format, choosing one from high school girls each of who has different characteristics and charm-points, and the most importantly feels kindness for you, you go out and experience school life with her.
Both games are published not from platform companies but from third-parties. But seems strongly cheered by Gree and DeNA(Mobage Town). TV commercial films of both games are on the air (embedded later in this article). 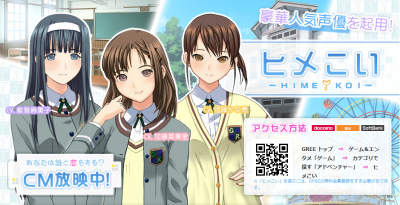 Himekoi [J] (a guide page on PC as the game itself is only on feature phone) by Winlight is a social game on Japan’s largest social network Gree.
“Hime” means princess and “Koi” is love. You, a high school boy, enter a school which recently changed from women’s to coed, and has a strict rule to prohibit dating. You are asked to go out by three girls on the same date, and will have to choose one with making it secret from the school.
Here is a playing movie by manabi2006,

Another movie by ajtmw86, showing the events with voice,

On the release of the game, Gree got some critics as Himekoi is too similar with LovePlus, like having three heroines, character designs and drawing touch. Some fans claim that even the girls’ illustrations are plagiarized [J].
The game is, as always told so on their CM, basically “free” but purchasing virtual items will help your school love life a lot easier. 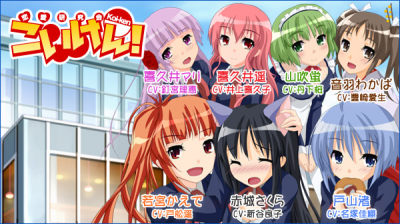 Koiken! [J] (again, a guide page for cellphone) by Vector is a cellphone dating game on Mobage Town, the game centric social networking service which is passing the No.2 Mixi by number of users.
The title “Koi-Ken!” means “Dating Research”. According to Wikipedia (Yes, Japanese Wikipedia has a dedicated page for this game), the game was released in January 2010.

In a virtual high school, you are going to meet 10 girls, establish a new club for researching romantic experiences. You will have to visit the game often and click to build your communications with the girls. And of course, your paying for virtual gears will make your virtual high school dating life better.
The game has a lot of spoken lines by popular voice actresses, but most of the recorded voice will be audible when you purchase a special item.
Koiken seems backed up by its platform, Mobage Town, as well. Here is a TVCM of Koiken by DeNA.

Mobage Town and Gree have been competing to be the No.1 social gaming network in Japan. They fight on court around fishing game, run engineer hiring race, spending more money on TV CM than Toyota and Coca-Cola. That is no wonder as the market, supported by far easier money charging mechanism on cellphone, is over 10 times profitable than U.S.
These dating games are just another battlefield for the big two. Whatever games getting popular, they have to ensure it on their line-ups, by referring their opponent, and consumer game consoles to become the last one to stand.