November 9th, small hour of the morning on NTV, one of the largest commercial TV key station, broadcast a program featuring Facebook Japan office first time ever.
The “IT information” program called iCon, was aired from 1:29 a.m. to 1:59 a.m. (usually described 25:29-25:59 on the day before in Japan). NTV published the edited version on Facebook.
The 6 minutes (the edited version. the length when on air cannot be found) program begins with the fact that Facebook is the world largest social networking service with over half billion registered users, the Founder Mark Zuckerberg is 26 years old, called as “Bill Gates in the Internet era”, the world’s youngest billionaire among listed on the 2010 ranking.
The biggest characteristics of Facebook they introduced is, 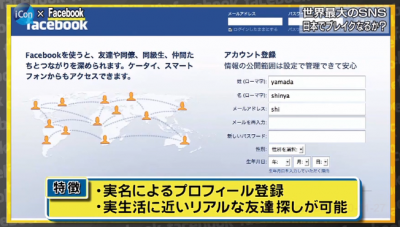 “it requires you to register your real name, which enables you to find real friends in real life.”
Then it is explained that Twitter-linkage, photo/movie sharing, Like-button are all provided “for free”.
The camera goes into the Facebook Japan office, which is the first time ever, and showing Facebook Japan’s top Taro Kodama. Kodama first shows a lot of Facebook novelty goods, then interview starts. 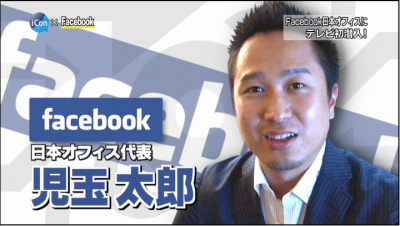 Q(NTV) Will Facebook be caught on in Japan?
A(Kodama) The Internet in Japan is not so closely connected with the real society, I think. In foreign countries including U.S., where real-name social networks are accepted, people use social network at the same depth as online map and online shopping. Social network is near the real life there, and we should radicate real name based social network in Japan.
Q What is the most attractive point?
A The best thing about being in real name is to be findable by others. When you start using Facebook, you will be able to find your old friends, university alumni, ex-bosses, which is no wonder, but not many Japanese people have experienced it yet.
Q Does existing social networks, Mixi, Gree and Mobage Town bother you?
A We do not think much that we are competing or to compete with them. There are just no real-name network basement in Japan. So Facebook will possibly fit into the room, we hope. Those existing community sites can keep providing their joy of being remote from the real life.
Q What is the new relationship between Facebook and TV?
A In U.S. and other foreign countries, most of popular TV programs like “24” are made tightly cooperated with Facebook. For example, backstage is shown on a Facebook fan page, gets feedback from audience there. There, TV is not airing one-directional information, but getting inspirations from watchers and that makes itself better. It will be good if those style will come and be used in Japan.
iCon’s fan page is the first fan page among Japanese TV program. There seems already a lot of fans (1,184), so you can make iCon in more interactive way, I hope you will.
(end of the movie)

The iCon took the Facebook rival Mixi in the next week’s program, which is not available on the fan page. They seem to interview Mixi CEO Kasahara on it.

Facebook will possibly fail in Japan – my prediction over 2 years ago. After that, all of major three introduced application platform, Facebook Japan developed Japanese cellphone dedicated version (though it is still poor). I think Facebook purchasing Mixi is the easiest way for them to add Japan in their conquered list.