With “Check”, Mixi copied Facebook’s “Like” function today, and while they were at it, Japan’s biggest social network copied Facebook’s location-based function, “Places”, as well. It’s just that on Mixi, “Places” is called “Check In”. So historically speaking, it took Mixi two years to follow Facebook’s Apps platform, half a year for “Like” and now three weeks for Places. They’re getting better.
As to be expected, Mixi Check-In allows users to let their friends know where they are and lets them share points of interests (Mixi calls these “spots”). All that users need to do is press the “Check In” button on Mixi Mobile, the site’s cell phone version.
Here’s how a list of spots looks on Mixi Mobile (choose one and check in):

You can “check in” by pressing the grey button on top and decide who to share your location with in the drop-down menu:

And this shot shows the latest locations your friends checked in at: 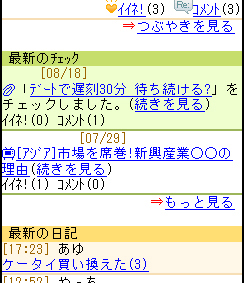 For Mixi, Check-in is far more important than Places is for Facebook, at least at this point. Mixi currently sees 30 billion PVs per month, and a staggering 24.5 billion of those come from cell phones. And in Japan, most of these are equipped with a GPS module, meaning they are theoretically ready for use with Check-In.