A Japan’s most popular Twitter user Gachapin, who took the most followed user title recently back from ex-prime minister Yukio Hatoyama who once passed him, is expanding his brand on two different geeks-loving products, Vocaloid and iPhone.
Gachapin is a 5-year-old dinosaur kid from a popular children TV program Hirake Ponkikki, who is also known as a blogger and a Twitter user(@GachapinBlog). 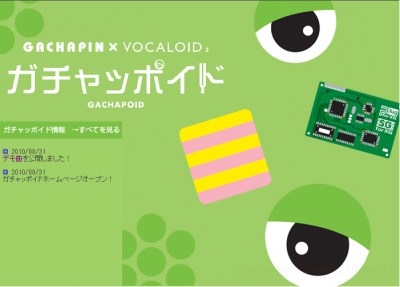 Last week, Osaka-based company Internet Co, Ltd. (great name!) announced that they adds a new product on their human-voice-synthesizer series based on Yamaha’s Vocaloid 2 technology with Gachapin’s voice, named Gachapoid. The package price is 15,750 yen (US$187).
# Popular virtual diva Hatsune Miku who once beat Lady Gaga in Japan by CD sales, who was emerged from Nico Nico Douga culture is another variation from another company on the same Vocaloid.
One Gachapoid’s sample song is available here for Windows Media. 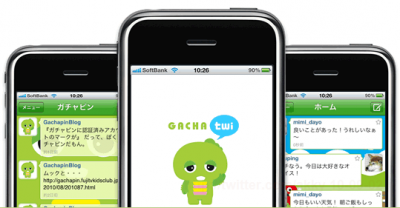 GachaTwi is a iPhone/iPod Touch Twitter Client themed with Gachapin by Genesix and Fuji Television Kids Entertainment, Inc.
Besides the regular Twitter client feature, the app has a special page to see Gachapin’s Tweets only, which can be seen by one of four menu button. 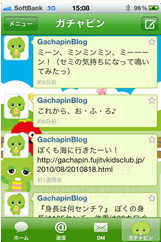 GachaTwi is 350 yen but 115 yen ($1.36) until September 12th.
Gachapin himself tweeted that he can not use GachaTwi because iPhone’s touch panel does not detect his hands. 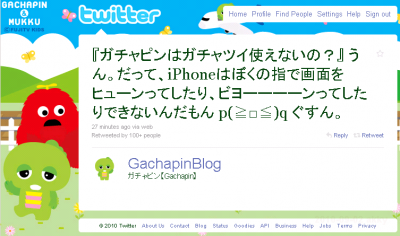 via AV Watch and MyCom Journal