[Update] The bug seems to be fixed and now Mashable and TechCrunch reported it (though they could not find the @zakuro563’s first tweet but someone’s long tweet at 3 hours later).
Some Japanese Twitter users found a Twitter bug around 140-letters limitation Saturday night (local time. JST). My test reproduced it like this. 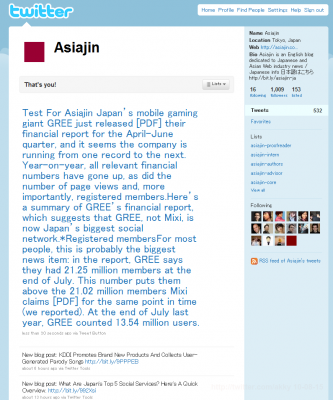 By the way, the long tweet is from our recent big news of the Japan No.1 social network service position takeover.
A Japanese Twitter user @zakuro563 seemed to be the first one. He posted 900 letters Japanese tweet around 7:30 p.m. 14th August.
The tweet, one of popular copied text circulating 2-channel and other forums for years, was quickly retweeted over 100 times, and some others tracked down and explain how @zakuro563 broke out the 140 letters limit.
It uses Twitter’s official URL shortening service t.co. t.co accepts not only URL but also any text. As Tweet Button introduced days ago, you can use its tweet box. Copy the following line to your browser address box, give over 140 letters text after ‘url=’. (If you include any symbols, you should urlencode them)

Then, enter gives you a shortened URL with the tweet box. You may add some base text on it when tweet.
Since twitter.com extracts all t.co’s URL to the original on browser interface, your tweet with the t.co URL will be expand and so you can convey near one thousand letters tweet.
Thanks for explanation, @0mg and @travelllist

His tweet is a well known copied text which is part of Japanese internet meme. It is a monologue by fictional hard-core fan of a Japanese juvenile novel series, who is totally nerdy and into a girl on the story. In Japanese it is “creepingly impressive”.
I don’t think I have such a good English command to translate those very colloquial, domain specific phrases. Luckily a certain anonymous bilingual 2-channel user translated it already so I paste it.

Louise! Louise! Louiseaaaaaaaaaaaaaaaaaaaaaaaaaaaahhhhhhhhhhhhhhh!!!
yarghh…uh…aaahah-! AaAAAAA!!! LOUISELOUISELOUISEaaaaAAAAaaa!!!
Ae…*sniff*sniff*! *sniff*sniff*! sssssaaahsssssaaah.. smells good…. *sniff*
*gasp*! I can haz sniffsniff pink blonde hair de Louise Francoise?! *sniff*sniff*! Aah!
No! I want fluffing! fluff! fluff! Hair hair fluff fluff! Scratch scratch fluff fluff… Kyunkyunnkyui!!
Louise-tan was so kawaii in vol.12 of the novels!! AaaAA…AAA…AhAaAAA!! FaaAAAnng!
Congrats on the 2nd season of the anime Louise-tan! AaAAAAA! So cute! Louise-tan! Kawaii!AaaAAA!
2nd volume of the comics were grea…nnNrAGGggghHH!! Nyaaaaaargh!! UGyaaaAAAAA!!!
Nnnnnnyyyyuuuurrrrgggghhhh!!! Comics…………………. AREN’T reality!!! ?…what about the novels and the anime….
LOUISE I S N’ T R E A L????? AAAAArgggghhHH!!! Uwaaaaaaannn!!
NononononoNONONONONO! EEeeeeaAAAA!!!! HGGGGrrrrruuyynnnnnNN!!! Halkeginiaaaaaa!!
You! BASTARDS! I’m quitting! I’m QUITTING REALIT…Y….huh!? She’s…looking? Louise-chan on the cover is looking at me?
Louise on the cover IS looking at me! Louise… at me! Louise-chan in the pictures in the book are looking at me!!
Louise-chan in the anime is talking to me!!! Phew… reality ain’t so bad after all!
Yessssss! Wheeeee!! YEAH!!! I have Louise!! I’ve done it Ketty, I can do it alone!!!
C..comic… Louise LOUISE-CHAAAaaaaaAAaaAAAN!!!!!!!! HyaaAAAaaaAaaaAAaA!!!!!
Ahahaah…ahahaaahhhhahaAnn! Si, Siesta!! HenriettaaaAAAAAAaAA!!! TabithaaAAAAA!!
u….uuuu..*sniff*sniff*uuuUUU!!! May my love reach Louise!! May my love reach Louise of Halkeginia!

This may be the next generation Japanese Lorem Ipsum… (headache)