Recruit, an online-and-paper publication company (Asiajin) has been teasing its Groupon clone with Twitter lottery [J] of 20,000 yen to 100,000 yen ($1,100) prize, finally launched Pomparade [J] today, but their memorable first coupon had an issue.
The first coupon seller is Ocean Casita, an Italian restaurant which locates at the 59th floor of Sunshine Ikebukuro building in north Tokyo. 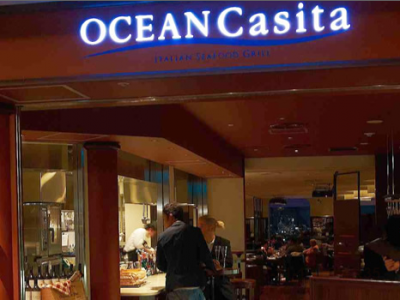 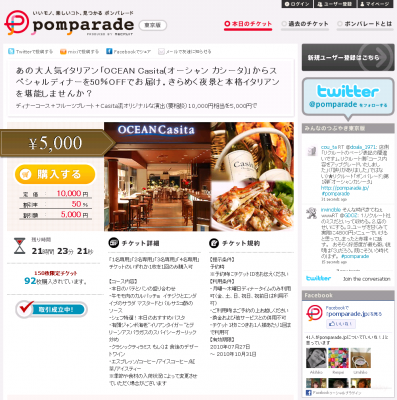 However, some users found that the almost same dinner course, “the course A” is sold both on the restaurant website and Recruit’s restaurant information site FooMoo in 4,800 yen ($55). And they do not limit any days of the week.
The Pomparade coupon, which is not usable on weekend, had two more items, “fruits plate” and “Casita style original performance”. But more people started tweeting that it is not reasonable to pay 200 yen for those two on top of the regular price. Some pointed out that could be illegal to say “discount” if the original 10,000 yen course never existed and sold before.
People on Twitter individually inquired to Recruit and Casita, which makes things more confused.
Casita answered to one user [J] over phone,

“It’s the same course as the regular 4,800 yen’s one. But we will try to save the window-side table, and give napkin as a souvenior”.

Another Twitter user got different explanation [J] from the restaurant manager,

“By seeing feedback on Twitter, we have upgraded the menu on the coupon from Course-A to Course-C.”,

which is totally inconsistent with the restaurant’s side explanation.
Later in the afternoon, Pomparade issued “why and how it happend” note both on Twitter (divided into 8 tweets) and the site [J]. There Recruit said sorry for three things, 1) all the fuss, 2) the coupon being uneasy to understand, and 3) insufficient explanation around two extra services. They admitted that both had answered some contradict info but the settled official answer is,
They both thought the course-A (4,800 yen) and two extra services was worth 10,000 yen so 5,000 yen coupon is 50% discounted. But the coupon page caused misunderstandings so both agreed to upgrade the dinner course to the course-C (8,400 yen).
Like as the pomparade ad is shown on Twitter Japan (Japanese localization has ad space on sidebar for 2 years), Recruit seems to put fair amount of promotion budget to this Pomparade.
Although there are already over 10 Groupon followers in Japan, most services are developed and run by rather small companies/startups. Recruit is the biggest challenger ever and they already have regular info-and-coupon media both in paper and on the web.
The 150 of coupons, in spite of this, were sold out quickly.
via Netafull