Two male senior students of Tokyo Metropolitan University uploading a series of movies on YouTube under the name of “Dobusu wo Mamoru Kai”(Save The Ugly Girls Club) early this month rapidly called a strong reactions from Japanese society.
June 12th at Tachikawa station, those guys asked ladies few pictures with lying it was for magazine, then unveiled that they were trying to record disappearing “ugly girls”. Of course, the girls protested and demanded to erase the pictures, however, they also record those interaction and uploaded them to YouTube. 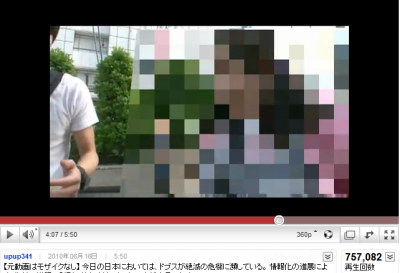 By knowing that some raged web users tracked those students personal information and publicized, the movies were withdrawn quickly [J]. But people found that the same group also made another movies such like running fake street donation, secret videoing women on train, under the name of “art” [J]. They told to the university’s inquiry, “We thought we could achieve some expressions by chasing humor happened from unethical behaviour.”
On 24th, the university announced [J, pdf] that those two students are dismissed, a graduate student who assisted video edit is suspended for one month.
[Update 2010-07-08] The university announced [J, pdf] that the associate professor, who was a tutor of those students, resigned under instruction.