DeNA, which runs one of big three Japanese social networking Mobage-Town, today announced and immediately launched MiniNation and its games, their popular social games and its basement community in English on iPhone/iPad for oversea users.

The games and MiniNation are only available “outside of Japan”. So it is not for their royal Japanese users but iPhone/iPad users who may have never heard DeNA or Mobage-Town. Apps are not accessible on Japanese iTunes Store.
MiniNation is a social community made of “mini-mail”, bulletin boards, sa-kuru(club), etc. Virtual point currency is planned to be introduced later. Aurora Feint Inc.(California, USA)’s OpenFeint ID is also usable. 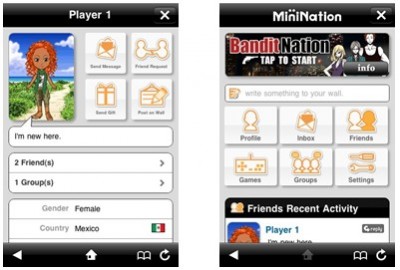 One of the initial four games is “Bandit Nation”, which is an English version of their popular social game “Kaitou Rowaiyaru(Royal)“. 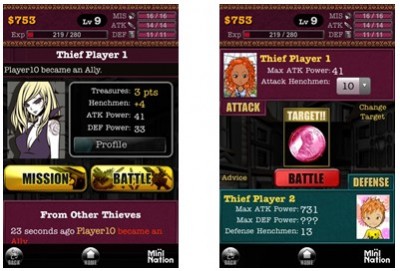 “Kaitou Rowaiyaru” is kind of flagship game of Mobage-Town. There is a DeNA’s commercial film dedicated to this game on-aired on television since last winter. I could not find the CM uploaded on the web.
This is a fan-made movies of a club in the game, to recruit members.

And some took the real game play on cellphone,

The other three games are an action puzzle, Sudoku and Solitaire. As same as its original Mobage-Town, you will not be charged to join and play. Some of users are supposed to purchase avatar accessories and items.