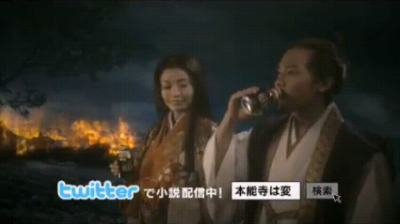 “Tsuduki ha Web de”(続きはウェブで, continued to the web) is an internet era’s Japanese phrase used so often on television commercial films (“CM” in Japanese) nowadays. Many commercial ends with a search box image and narration tells this “continued to the web”, to expect watchers to search their brand or catch phrase on their PC.
This month, Coca Cola Japan [J] starts new TV commercial ends with “Tsuduki ha Twitter de” for its canned coffee brand “Georgia” [J]. You may see it on the end of this 15 seconds commercial [J].

The suggested search phrase “Hon’nouji ha hen” takes you to the campaign site both via Yahoo! Japan and Google. Well, this type of campaign depends on search results, but at least advertiser buys the first positioned ad. 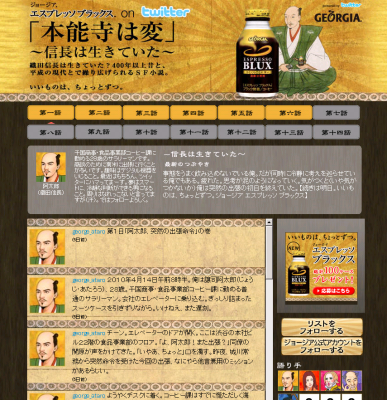 The campaign itself is a Si-Fi novel based on 16th century history, and there are 8 characters tweeting their part to make up the story.