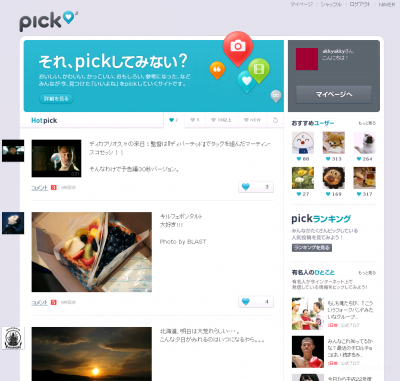 On Pick, user can post text, image, movie and geolocation. It also encourages users to clip others’ post by 1-click “pick” button so “anyone can join the pick community even if you do not write/upload anything. you do not need writing talent” (on release note).
The above point is exactly where Tumblr is getting success in Japanese. Now Tumblr is seeking to gear up for Japan by hiring Japanese consultant, but localization has not been done yet. Naver Japan has possibility to compete as it is not only all in Japanese UI, but also providing cellphone sites covers 3 major cellphone carriers. iPhone application is also planned, they says.
Another twist is “Yuumeijin no Hitokoto”(Celebrities’ phrases) page, which aggregates 6,000 celebrities’ official blogs and twitter messages as a material for users “pick”. 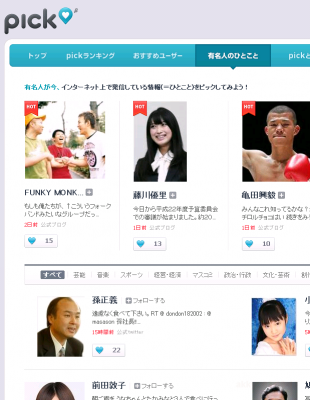 As the popularity of CyberAgent Ameba blog hosting was driven by holding thousand of those well-known people as bloggers, Japanese websphere is fond of TV stars more than in English. The page seems to just reuse RSS feeds, but may attract some web users.