On an article “Half Of Japanese Male iPhone Users Keep Their Japanese Cellphone” comments I got a good question from @seanohagan,

It would be interesting to see how this number compares to an average Japanese male.
What percentage of Japanese men have 2 cellphones? Did the research mention anything about that?

He is right. Without knowing average ratio of all multi-cellphone users, we can not tell that the half of male Japanese keeping another Japanese cellphone on top of iPhone is strange or common.
Although it is half an year ago (just before iPhone 3GS release), I could find another questionnaire to ask 2395 Japanese cellphone users how many cellphones they have, done by Update Inc. and its Mobile Marketing Data Laboratory [J].
According to the research, 20.5% of cellphone users have sub cellphone(s) besides their main cellphone. The most popular second cellphone is Softbank Mobile (iPhone excluded), then Docomo, KDDI au, Willcom follows. iPhone is ranked at 7th with 0.3%. (It does not tell how many people use iPhone as their main cellphone. Main cellphone share from the same research is Docomo 46.4%, KDDI au 39.4% and Softbank Mobile 13.8%) 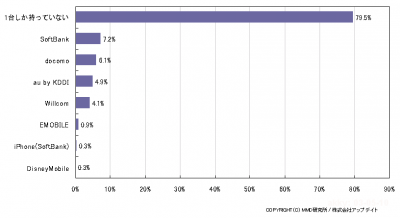 The research did not ask reasons. Possible reasons I guess are to separate private and business usages, to get fixed rate with specific friends (phone and SMS, as SMS in Japan is only within each carrier network. Most people just use the internet e-mail on cellphone), fixed term contract, want to use carrier exclusive cellphones and plans such like Willcom and iPhone, etc.