UPDATE:
Over 3G, make sure to wait 30-60 seconds for the stream data to get cached. After that, you’ll notice a significant jump in picture and audio quality.
Japan has a plethora of TV channels, but the biggest battleship is NHK [JP], the country’s national public broadcasting organization. NHK itself operates a number of different channels, and one of them, NHK World TV, has just released an English app for the iPhone/iPod touch [App Store link].
NHK World is the international broadcasting service of NHK, offers programs in English and is primarily aimed at the overseas market. Their free app enables you to watch NHK World live, meaning you can access the channel’s entire program from anywhere in the world on your iPhone or iPod touch. (There are some exceptions for reasons of copyright.) 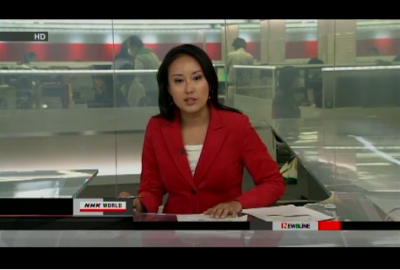 Just fire the app up and you can instantly start watching the program. This works even over 3G, even though you (obviously) get better video and sound quality via Wi-Fi (the app’s official description says that up to about 9.5MB of data can be received every 10 minutes via 3G). The app itself is just 2MB and includes a program schedule. 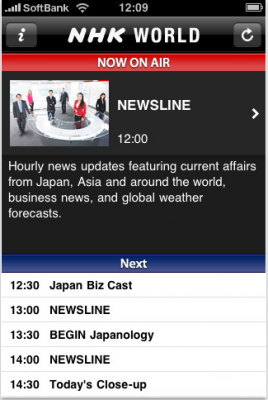 Japan’s large industry is notoriously anti-web, but NHK has been cautiously opening up to the web in recent months. It was the nation’s first major TV network that started putting contents online on an own channel on Youtube (NHKOnline). More recently, the broadcaster also announced it will live-stream events from the upcoming Winter Olympics NHK doesn’t show on TV on a dedicated website.