Different language, different application. That is not an exclusive phenomenon for web services like Facebook against Japanese big 3. The most popular P2P file sharing software on Japanese web is not BitTorrent.
First, it was western WinMX follower Winny. When Winny network caused chaos on society by virus (which uploaded private and enterprise files under Windows’ “My Documents” from companies and government organizations) and arrests.
The development of Winny was stopped, and P2P users migrated to Share. After some allegations by uploading copyrighted movies on Share, Perfect Dark, which began at end of 2006 and boasts its higher anonymity, has been taking the position of the former two. 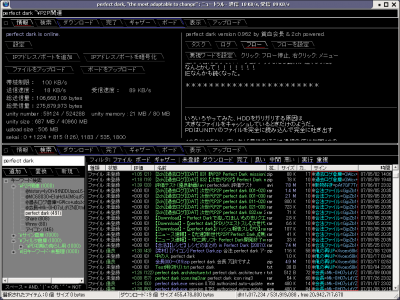 screenshot by a blogger shinn_asuka_impulse
On January 27th, the first person who distributed copyrighted animation films over Perfect Dark network was arrested in Saitama prefecture. [J]
From the beginning of this year 2010, downloading illegal contents became crime by revised copyright law. Until 2009, only uploading side was illegal. However, this accusation is not by this extended download, but by upload.