Well, who the hell marks 100,000 favorite on Twitter anyway? Japanese! 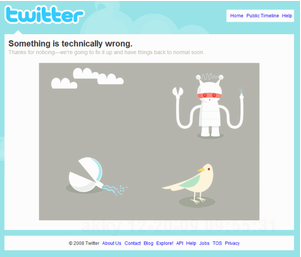 Many of those users became inaccessible to Twitter, and common attributes of them are number of favorites over 100,000 to 110,000.
After ignored by Twitter Japan support, @katoyuu contacted Twitter US support in English, but that resulted in “Thank you, we will investigate it” replies without further replies.
Many of them gave up their accounts and created another accounts. But after months @katoyuu noticed that his old account is accessible, … with all his 168,000 favorite disappeared.
This unexplained lock-out was named as “Fabo-Shi” (Death of Favorite) by Japanese Twitter users.

But why do you need 100,000 favorites? Well, different culture makes different use of web services.
Favotter, Japanese counterparts of Favstar, counting tweets gaining many favorites and show, is an important part of Japanese Twitter scene and often generates buzz. (Favotter has an English version, too) 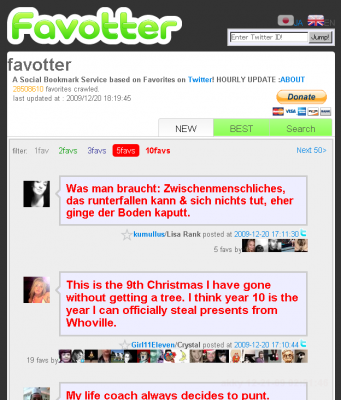 There have been other similar popular services before Twitter’s favorite.
Webu Hakushu (Web Clap) [J] is a service to provide scripts other websites and blogs to make favorite-type “applaud” button, got popularity around year 2003. Sites visitors can push the button to express their appreciation. The first generation of social web service.
Hatena, geek’s favorite social services, also has Hatena Star, which let you mark “star” on blogs, blog comments, bookmarks, etc. Exporting Hatena Star to third party websites seem not successful, but this Hatena Star is extremely popular among Ugomemo Hatena (Flipnote Hatena in English) users assisted by Nintendo DS popularity. 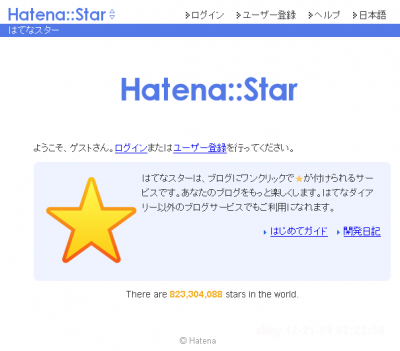 Critics and discussions are generally not so welcomed by Japanese web users, when you compare with western websphere. You see it by Slashdot Japan stalled for long years and none of Digg clone really succeeded in Japan. But still people needs for some kind of approval on the web and this favorite-style attracts Japanese a lot because it only conveys positive information.