Then, your Japanese typing calls the IME. The user interface is not much different from other IME so no Japanese user should have difficulty to use. 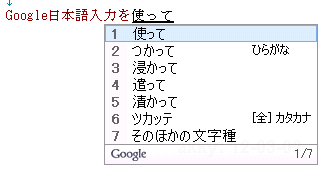 IME tools allow you to import/export your own dictionary difinitions, switch keybind to some popular existing input methods. You can optionally send all your typing and choices to Google server to improve their social dictionary for better conversion algorithm, which is also supported by other commercial and open source input method tools.
Historically, Japanese input method environment(IME) on personal computer has a long history because it is the critical application everyone needs, since 100-letters keyboard cannot handle over 3,000 letters in any way.
In MS-DOS era, there are many commercial IME competed, but for Windows and Macintosh, Operating System bundles one default embedded IME, purchased from Japanese companies, and most people are using that, except few people including professional writers who buy commercial IME such like ATOK by Just System, which once was the biggest Japanese word processor provider.
Google has massive Japanese data by their collecting web pages, which indexed and processed for search and Google suggest. That could be a big advantage for showing better Japanese candidates. On the other hand, their boasting “automatically generate from texts on the web” approach may tend to show more colloquial results, popular choices than grammatically correct choices.
As IME is “more popular than web browser” application for Japanese, this release is causing a lot of buzz now and Japanese twitter timelines are now flooded with which minor/niche phrases/proper nouns they tested with the Google IME were properly converted, or not.
Google China released Google Pinyin, Chinese input method, in April 2007, which caused some troubles (info by @gen).