Tokyo-based (and listed) web juggernaut CyberAgent‘s virtual world Ameba Pigg [JP] has proven to be a veritable success here in Japan since its launch this February. The company says there are now 1.5 million members in the virtual community, with an undisclosed number of those coming from Non-Japanese-speaking countries (the service is Japanese only).
But next spring there will be an English version of Ameba Pigg, on Facebook. This means Cyberagent chose to go a different path this time after launching a stand-alone English version of its other hit virtual community Pu-pe Girl soon after the Japanese original was live. 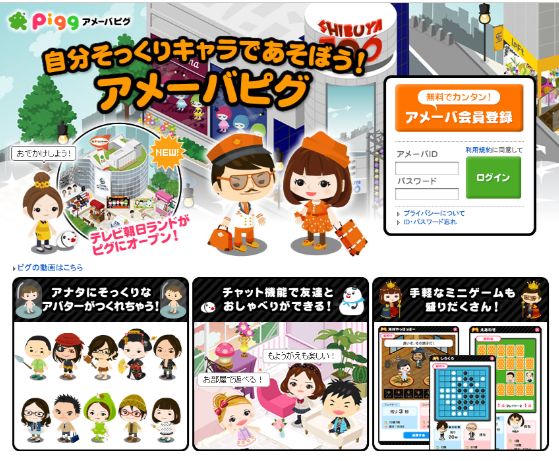 CyberAgent says they will “Americanize” Ameba Pigg by offering users more possibilities to change the look of their avatars and selling virtual clothing tailored to American users (CyberAgent is said to currently pull in about $1 million in sales of virtual items from Ameba Pigg per month). In addition, the avatars will be able to interact in environments such as the virtual version of Central Park in New York, as opposed to districts like Shibuya in Tokyo, for example, where Japanese users can interact.
Another CyberAgent property, virtual pet game meromero park, was largely left unchanged (design-wise) when it made its way to Taiwan last year (background on Asiajin). Interestingly, the same is true for the English version which was launched on Facebook, too (in August this year). So why CyberAgent now apparently decided to streamline and take the “Japanese feel” away from Ameba Pigg is beyond me, but many Japanese web companies think that’s the way to go to get international users (the final design of the English version hasn’t been shown yet though).
Check out this video to get a taste of the cutesy feel of the Japanese original: