Mixi, the biggest social network service in Japan, started their OpenSocial compliant application platform Mixi Appli officially opened to every Mixi user on PC on last month. Mixi Appli Mobile is planned to follow this month.
After couple of months closed beta test, Mixi successfully lined up 130 applications by third parties and affiliated startups, including big names like Yahoo! Japan, Konami, Recruit, etc.
However, a company called Community Factory, start-up got the first OpenSocial app grant by Mixi, which encouraged to create Mixi Appli, released a social game seems to be inspired by Facebook’s successful Friends For Sale!, but with surprisingly sick taste. They named the game as “My Slave-chan”. (“-chan” shows some affinity. “-chan” is a colloquial form of “-san”, which corresponds to English “Mr./Ms.”.)
Even the concept of selling your friends on the Facebook app got some critics. On this slave application, according to their erased instruction, players are supposed to buy their friend on her/his social graph as a slave, with giving another name, get her/his to shout your making line, force to serve as a slave to earn money. 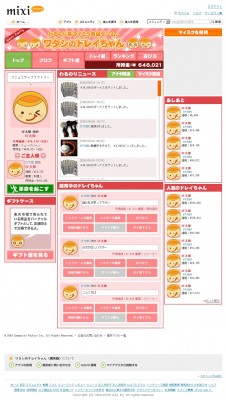 The application rapidly caused condemnation among bloggers in hours after launch, and the app was withdrawn on (the very same Mixi Appli platform launch day) August 25th.
On Mixi Appli, Community Factory also released a game “Chusha Sensou” (“Parking War” in English) which is similar with Parking Wars on Facebook, and a game “Densetsu no Totem Pole” (“legendary totem pole” in English) which has the pretty same concept as the popular Facebook game Tower Bloxx, according to the blogger mixiapp.
via ITmedia News