One of the big differences between the web in Japan versus America or Europe is the way sites are being monetized. Generally speaking, the level of acceptance for the freemium model seems to be higher among Japanese users. As a ballpark number, it’s safe to say that usually between five and 15 percent of users choose to pay if they can go for a premium membership on a given site.
People on Japan’s biggest social network Mixi [JP], for example, can pay 315 Yen (2.40 USD/2.30 Euro) monthly, i.e. to get more storage space for their videos and pictures. There are many examples like this, with numbers varying widely. Major portal Livedoor [JP], for example, says 17% of their active blog platform [JP] users pay, generating 30% of overall sales (Mixi: around 7% of all sales).
Another example is Nico Nico Douga [JP], a Japanese video portal with a unique commenting system (Asiajin articles). Nico Nico says [JP] that the number of paid users passed the 500,000 mark this past Saturday. These people pay 525 Yen (5.70 USD/3.90 Euro) monthly to get more features for Nico Nico’s fixed web and mobile version.
Nico Nico video screenshot (click to enlarge): 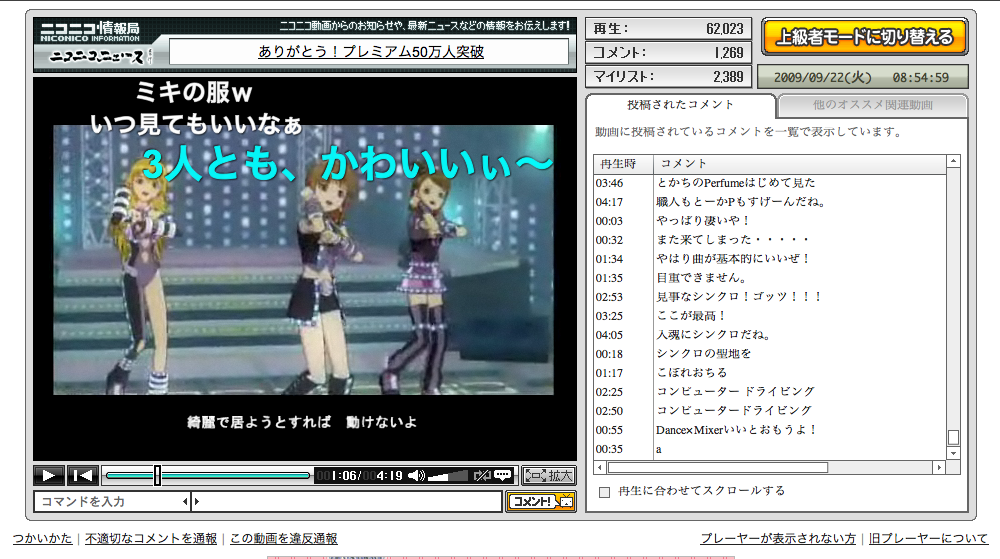 Another interesting tidbit of information is how quickly this number ballooned (according to Nikkei IT Pro’s research [JP]):

And Niwango says [JP] a recent survey showed that 77% of all paid users are satisfied with what they get for their money.
A major reason for Nico Nico’s success is that many people just love the service. The site with its tons of exclusive video material offers a unique experience, boosting user engagement to a level that’s probably unparalleled in Japan’s web world. The important thing to understand is that Nico Nico isn’t just a video portal but also has very strong social network/forum/community elements. (People basically discuss via texts placed on top of the video feeds and interact with each other in many other different forms.)