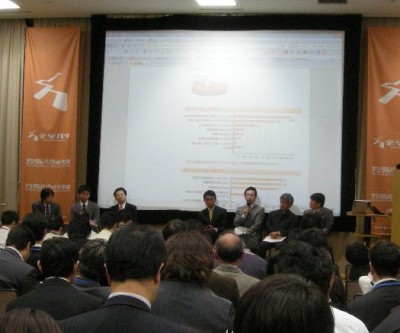 Agile Media Network held a conference “Internet Changes Election?” [JP] on April 24th. Statesmen and NPOs discussed about the use of Internet for election in Japan.
Shin Itoh of Japan Initiative [JP] gave a 30-minutes talk on Japanese Election Law. He said that the law is unreasonably strict. Electoral campaign is only allowed during official election term. Requesting a vote to specific person is considered as electoral campaign.
Vote request can be done only by the methods specified in the law, such as:
* yell candidate’s name from car speaker
* send limited number of postcards.
* post posters to official bulletin boards.
* hold mass meetings.
Taro Kouno, a Representative of the Liberal Democratic Party (LDP), and Kan Suzuki [JP], a Senator of the Democratic Party of Japan (DPJ), both agreed that the law is need to be changed, and campaign over Internet should be allowed too.
Kouno commented that Japanese statesmen are already using Internet very heavily. He thinks that Internet use is allowed except official election term.

“Someone sent me a Harakiri costume.”

However, Kouno worries that most bloggers and 2channelers don’t confirm the fact of their writings. Many bloggers wrote that the change of Nationality Law which is made by the Supreme Court is masterminded by Kouno, and someone who believed that threatened him.
Daigo Satoh is operating a NPO called “Dot jp” [JP] which sends students to statesmen’s office as intern. Suzuki said that most of the students have clearly negative feeling over statesmen, but after the internship, the students changed their mind completely. Suzuki feels negative feelings are caused by media bias.
Satoh is also a mastermind of Yahoo! Japan Politics [JP]. Yahoo! Japan Politics provides detailed database of statesmen and their policies.
Satoh emphasized that Election Law restricts not only politicians but also applied to voters too. He read all articles of the law one by one, and asked questions to Ministry of Internal Affairs and Communications and the Board of Elections. The ministry and the board said that the law is too vague to reply a clear answer. They answered that the law is finally interpreted and executed by the National Police Agency.
Kouno admitted that many statesmen hesitate to criticize the National Police Agency, because the NPA will revenge on statesmen by arrest them for illegal campaigning.
CEO of Agile Media Network, Motohiko Tokuriki concluded that people can do nothing for election because the police is too terrorizing in Japan.
Kan Suzuki declared that the DPJ is eager to change election law, and ready to discuss with the LDP, the ruling party.