Beijing-based mega technology conglomerate Peking University Founder Group Corporation has announced a new iPhone application that will make it possible for iPhone users in Japan to read five major Chinese newspapers in their entirety.
Founder’s Japanese arm [JP], based in Tokyo, will launch the app as early as next month (press release in Japanese). For 315 Yen/2.40 Euro/3.30 USD per title and per month, readers can download a daily copy of their favorite newspaper by 10 am and view it on their iPhone from page one to the last.
The app will probably have a function to auto-translate articles in English and Japanese, too. 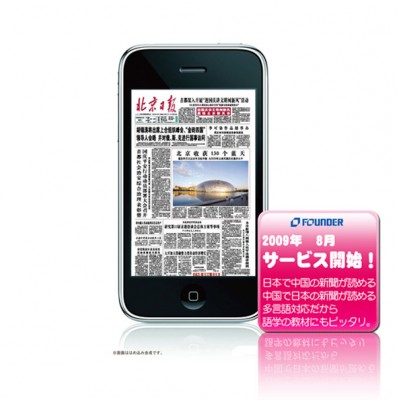 So far, so good, but here is the drawback: Founder said the new service will be offered in Japan only for the time being. However, the company aims at rolling out the service world-wide eventually and wants to get 600,000 subscribers within five years.
It seems more and more Asian print publications publish on smartphones. Three major Japanese newspapers have gone iPhone (in a different way) back in February already.
Via Nikkei [registration required, paid subscription]